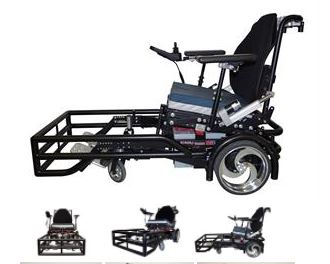 July 2021
Boston Self Help Center is purchasing a Strike Force Chair which will be available for the Boston Brakers team and guests. Never tried one? You will have the opportunity to try it out!


The Strike Force from Power Soccer Shop is the first wheelchair designed specifically for power soccer! Designed with a low center of gravity and wide wheelbase, the Strike Force is able to move with more agility and spin kick with more power than any other power wheelchair in the world! Equipped with top-notch components and built on a durable steel frame, this chair is ready for the rigors of elite competition. The Strike Force is the only choice for serious power soccer athletes. Each chair is tailor-made with a wide variety of options to perfectly fit each athlete.

April 11, 2020
Save the date! We will be heading to Canton Massachusetts to Pappa’s rehabilitation high school To compete for the annual Cheuchi Cup Tournament.

March 4, 2020
Jim Wice presented to a Boston University occupational therapy class on the topic of Power Soccer and other adaptive sports.

February 29, 2020
The team participated in an excellent tournament up at Colby college Saturday. We won a close game against NEP, Made a great comeback against the chariots but could not beat their scoring machine and lost to our friends in Montreal giving them their revenge For the last time we beat them.
February 1, 2020
Team members competed in the wheelchair strong tournament held in Hanover Massachusetts on February 1, 2020. The team lost a close one to team from Montréal, 1-2, won against the NEP Powercats, and lost to the Chariots 0 – 2.

December 8, 2019
We were able to again this year put on a great tournament hosting eight teams from New England and Canada. Everyone got to play at least three games while also getting a visit from The New England Revolution‘s mascot Slyde. Newly elected Boston city councilor Kenzie Bok also came down to watch the action and get a picture with Slyde.

Plenty of great food supplied by Mike’s donuts, Brigham and women’s hospital, the Baptist hospital, Boloco, and penguin pizza. We also have to give a special thanks to Commonwealth care alliance for being our main tournament sponsor. Thanks also to the great staff and all at Melnea Cass recreational complex.

November 16/17, 2019
The team Went to Durham New Hampshire this weekend to play in the Anthem Power Soccer tournament. We had one of our most successful tournaments winning four games and losing one. Everyone that attended got to play and scored goals. Much thanks to our hosts at NEP. We look forward to seeing 8 at our Sunday, December 8 tournament at Melnea A. Cass Recreation Complex in Roxbury Massachusetts.

June 2019
The team went to nationals in Fort Wayne with High Hopes. We were only able to afford to send five players, Matt, Joe, Juan Carlos, Steve and Jim. After playing the first game against Mike Neville and his always competitive team we came up with a 2-2 Tie. As our second game began, Joe acquired a knee injury with the ball hitting him hard and taking him out of the remaining games.

With some clever re-altering of our play primarily through Matt and Juan Carlos‘s planning, we came up with a more defensive strategy that served us well. Offense was a bit more difficult. In the end, we all felt good about the tournament and our response to adversity. We found that winning was not everything as we came in in the bottom of our conference.

It was great to see Matt Pellegrino get acknowledged as most valuable player on our team for the conference.

We all will be there next year!

April 13, 2019
The Boston Brakers participated in the Paul Cheuchi invitational tournament this Saturday April 13. There was excellent play by the three teams participating. Boston finished with two ties The first a one to one game against the New Hampshire Wildcats. The second a one to one tie against the Pappas chariots. Since all three teams will be at nationals June 16 through June 18 in the same conference, Expect some competitive play by these New England teams.

August 25, 2018
Team cookout at an undisclosed location. If you know a team member, feel free to ask for an invite.

July 31, 2017
The Boston Brakers Power Wheelchair Soccer Club will be holding demonstrations the first three Saturdays in August from noon till 2 PM at the Tobin Community Center, 1481 Tremont St. in Roxbury/Mission Hill. The Club is interested in having any power wheelchair users come to see how power wheelchair soccer is played. There will also be opportunities for trying out the sport for those who want to try. Feel free to drop by or for more information please contact Jim Wice, JJWICE@Gmail.com, 617-777-3861.

April 15, 2017
The Boston Brakers enjoyed competing in the annual Cheuchi Challenge Cup Tournament in Canton, MA. It was a highly competitive tournament with local teams competing. We are pleased to report that we took first place! Now we are hopping to use this positive momentum into our next big contest The MK Battery Conference Cup Series in Indianapolis. June 16-18 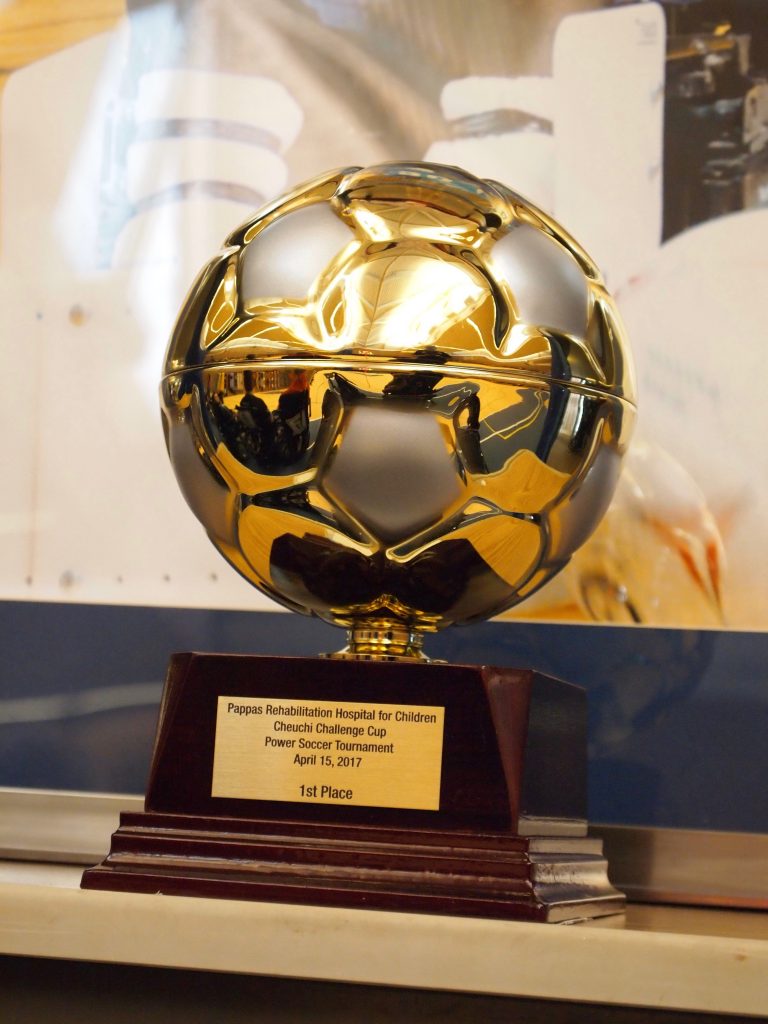 February 18, 2017
Thanks to the NEP Wildcats for coming to Boston to play two games Saturday. Both teams are looking good as we approach nationals in Indianapolis June 16 through June 18 this summer. In Saturday’s games, the Boston Brakers managed two hard-fought win’s; 3 to 2 and 6 to 2.

22 teams in three conferences will battle for the right to be crowned Conference Champion! 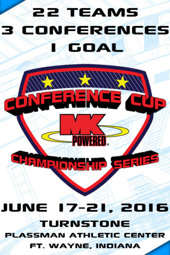 Power wheelchair soccer is the fastest growing sport in the world for athletes with disabilities using power wheelchairs. Various areas of the country have seen significant growth of the sport including Indiana, California, and Florida. The Boston Brakers hope to have the same type of success in promoting the sport here in Boston, as well as the surrounding New England area, in an effort to give power wheelchair users a chance to experience competitive sport and sportsmanship. 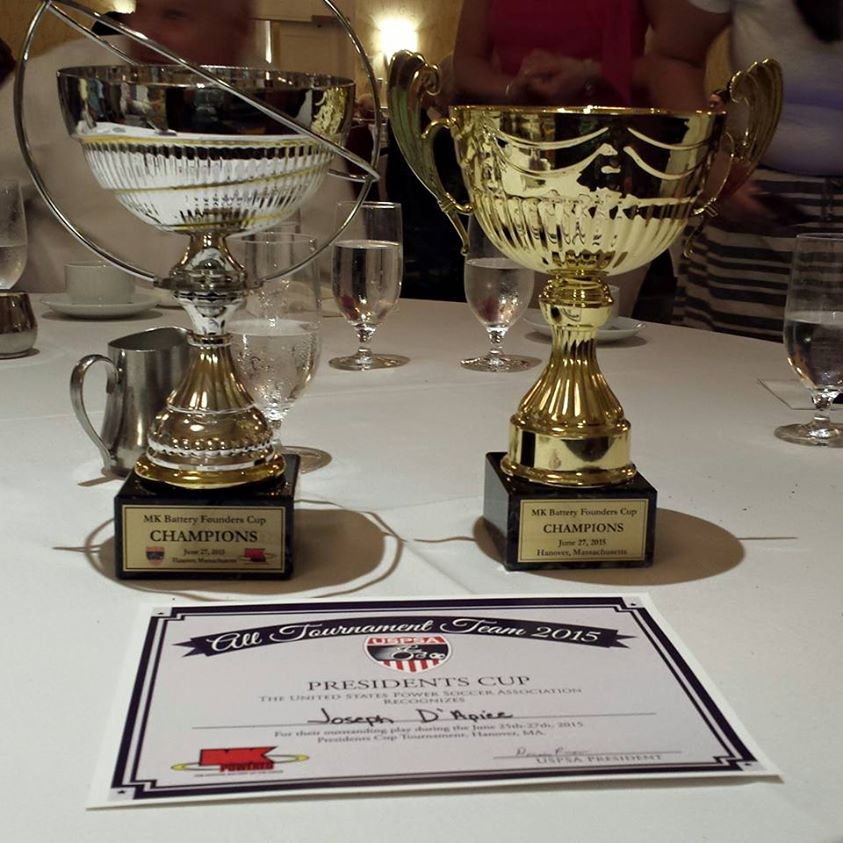 THANK YOU EVERYONE WHO HELPED AND BOUGHT TICKETS!!

Four members of the Boston Brakers journeyed up to Vermont on October 26 to compete and to support our northern mentors as the University of Vermont at Burlington celebrated disability awareness month. The competition was fierce as we drew to a 1-1 tie in the first game. In the second game Joe and Matt heated up for some scoring and Karen continued in net from the first game into the second game to hold onto a 3 to 2 victory; the first victory we’ve had against Vermont. We are all thankful for the hospitality and coaching advice the team from Vermont provided. We are also thankful to their sponsor, Home Medical, who generously lent us a Hoyer lift so that we could spend the night.

On Sunday, October 12 the Boston Brakers hosted its annual Boston Power Soccer Tournament at the Melnea Cass Athletic Complex in Roxbury. Seven teams competed which included a team from Vermont, New Hampshire, New York, Montréal, and three from Massachusetts. Attendance was estimated at approximately 200. Thank you to our many sponsors that included the Boston Police Athletic League, the Baptist Hospital, Brigham and Women’s Hospital, Wentworth Institute for Technology, Boloco, Mike’s Donuts and likely others who we will recognize later.